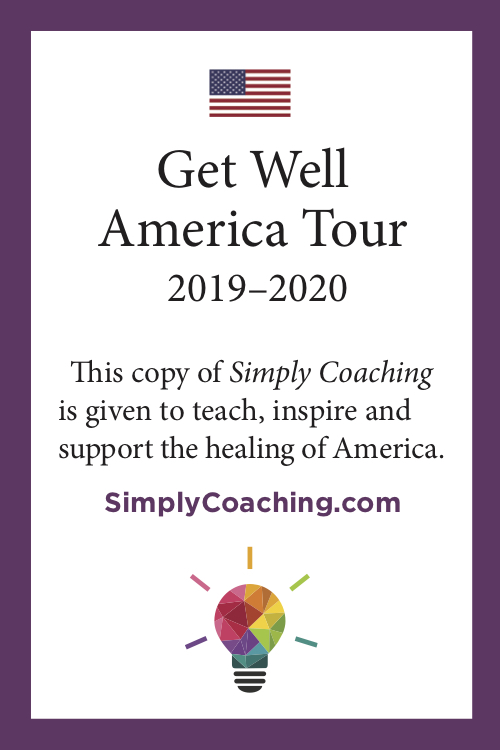 Welcome to the
Get Well America Tour!

Tired of all the meanness? Try some kindness. Join Lynn as she travels America extending kindness to others, inspiring and encouraging us all to increase our daily kindness, first to oneself and then to others.

The “road angels” she meets understand the power of kindness and the desperate need for it in our lives today. They too are tired of the meanness and are looking for a way to stop it. They understand that each and every one of us has an opportunity to significantly increase our kindness.

It is easy to increase kindness when the ability and habit of seeing something good in oneself and others is developed and we are able to celebrate one another with genuine care and acceptance, be it family, friends, acquaintances or strangers.

To support her work in the healing of America through kindness, Lynn often gives a pass-along copy of Simply Coaching for Your Highest and Best to the people she meets along the way. She also leaves copies in Little Libraries throughout the country, each book given with a wish for it to find just the right people to teach and inspire a kinder, better life.

Join Lynn in this most important effort at this difficult time in our country’s life.

Be kind to yourself first and then to others.

Pictures and Stories from the tour

Welcome to the Get Well America Tour! Tired of all the meanness? Try some kindness. Join Lynn as she travels America extending kindness to others, inspiring and encouraging us all to increase our daily kindness, first to oneself and then to others.

One of the things that I’ve noticed since coming back up to New York to visit friends over the last six months is that I’ve gone out of my way to talk to the “service people” — whether they’re doormen or baristas. And it’s something that I never did before leaving for Asia.

But what I’ve noticed since coming back to DC and New York, is that whether it’s on the subway or on the street, that simply smiling at someone or talking with a stranger, everybody reacts with such warmth and kindness. And it’s really beautiful. Everybody I’ve done this with, which is quite literally everybody I’ve interacted with here, lights up and glows.

And so I remember distinctly during my graduation when you talked with a woman who had a broken hand, and feeling awkward in the elevator because ‘you’re not supposed to talk with strangers in the East Coast.

I’ve had some really amazing conversations and learned a lot about people who are struggling and living and thriving in ways that you can’t see when you just walk by them and don’t bother to say hi. It’s tragic and beautiful and really quite a gift.

So thank you for teaching me that. Because I feel like I’ve learned so much and been so fortunate to be able to have that kind of a connections with strangers whom I would have never talked to if I never learned that from you. ❤️

Where r you now gypsy queen? And who told you not to talk to people?

My childhood smile route taught me that smiling, particularly at someone else, could and would lift my own spirits, while doing the same for someone else. Years later I when a coaching client or friend would be down in the dumps, I would ask them to go a grocery story, get a cart and travel up and down the ailse until they had smiled at at least 10 people. Works like a charm!

One never knows just how powerful their smile might be. Road Angel Allan Straub at Lake George New York shares a great story about he power of a smile!

This little library is in front of Wayside Food Program. There is a beautiful flower and vegetable garden...all tended to by Waykside's amazing staff in Portland, Maine. Check out the video below! And remember --- be kind...first to yourself and then to others!